Since my early days in luthery school and later as an apprentice in guitarmaking shops, one of the dreaded events was ‘creative input’ from customers. To succesfully design a coherent instrument requires years of study, practice and refinement, so what a customer wants to add as a unique touch on his instrument might not fit easily in it or work well.

The approach of different makers on this matter differs widely, as does the general approach to designing the instruments. In violinmaking, for instance, design is so stiff and defined that there is just no room for a lot of change; at the other end, there is the modern guitar world (electric and steel string) where anything can be done: makers willing to experiment are free to go far out, often with input from musicians. See for example the famous Pikasso from Linda Manzer or the work of Fred Carlson, just to name a couple whose work i know.

Classical guitars are somewhat in between those extremes, with room for change and innovation but a fairly defined (although evolving) repertoire and instrument’s form. In my own work, i’ve been fairly conservative, developing my instruments from the inside of the tradition. That involved moving to Spain 14 years ago and learning from traditional masters like Paco Santiago, Antonio Marin or the late Rolf Eichinger. In this framework what can be suggested by a customer and fitted in a finished instrument is fairly limited, often to picking the woods to be used: 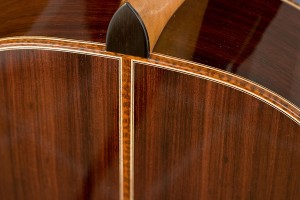 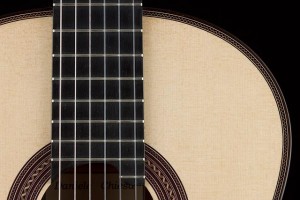 scale length (650mm or 640mm) and other such details; sometimes going as far as some custom inlay: 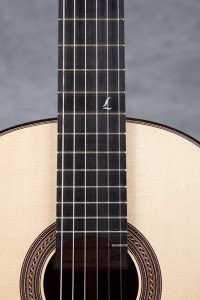 Recently though, i took up a bigger challenge that is both a lot of work and fun: a guitar player with smaller hands, already using one of my smaller 640mm scale instruments, wanted a much shorter scale – 600mm. On top of that, bieng from Cataluña, she wanted the rosette to be inspired by some of the decorations in the amazing Palau de la Musica Catalana in Barcelona, a modernist building from the early 20th century.

After thinking about it, i finally decided to go ahead with this challenge; i would make two instruments, slightly different, so the chances of satisfying the customer with something so far from the norm would be greater. And the other instrument will be available to one (or both) of my young daughters should they want to play in a few years…

After looking at many details from the Palau, the colored glass ceiling struck me as very appropriate for the rosette: 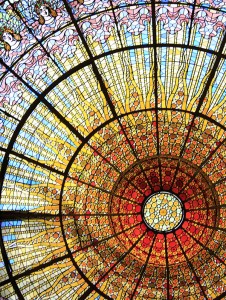 Of course it was not easy to translate it into an actual rosette; it might take a few more posts to show that process!